The debut in Sanremo

Despite making many pieces, Masini had difficulty finding a record company that supported him. 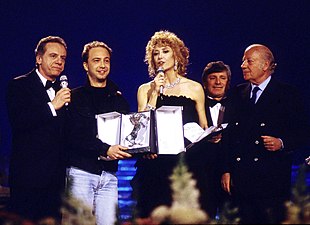 A debutant Masini (second from left) rewarded as winner of the News section at the Sanremo Festival 1990 with Disperato. Thanks to Bob Rosati, arranger and owner of a studio in Sesto Fiorentino, Masini began making the first auditions: he met Beppe Dati, composer and poet with whom he made some pieces. In 1986 the important meeting with Giancarlo Bigazzi arrived; Masini then collaborated in the creation of soundtracks (Mediterranean, Mery forever, Boys out), was the guiding voice of Si can give more, brought to Sanremo by the trio Morandi, Ruggeri and Tozzi, and live concert performer in Tozzi’s tour at Royal Albert Hall in London.

He left for the first tour in 1987, then was still on tour with Raf, whose album What will remain … he was responsible for the realization and arrangements. In 1988 a 45 rpm car was released entitled Men on the initiative of Mario Ragni, with which Masini was supposed to participate in Sanremo of that year, but was later replaced.

Also in 1988 a 45 rpm came out containing the song From your eyes on, sung in duet with Rosita Celentano. In 1990 he participated in the 40th Festival of the Italian Song of Sanremo with the song Disperato, written with Bigazzi and Dati, coming first among young people in the News section. The album that makes it follows a great sales success stationing in the highest positions of the sales chart until the whole summer of 1990.

He participated in the Sanremo Festival 1991 with the song Why you do it, which came in third place, after Riccardo Cocciante and Renato Zero. The song should have been sung by Umberto Tozzi, with another title and another text, but that year Bigazzi preferred to give the song to Masini, while Tozzi sang The Others are Us. In that year the second album was also released, entitled Malinconoia (word coming from the union of the terms “melancholy” and “paranoia”), and in the spring, starting from April 18, the singer made his first solo artist tour , who saw him perform in several stages of such great success that he had to repeat the concerts of Florence and Rome respectively. For the latter city, the first performance took place at the Tendastrisce Theater, while the second at the Palazzo dello Sport.

His accompaniment group was made up of Mario Manzani and Massimo Rastrelli on guitars, Marcello De Toffoli on keyboards, Bruno Illiano and Cesare Chiodo on electric bass, finally Alfredo Golino on drums; [1] Andrea Corsellini figured as a sound engineer, role that from that moment he would have covered also in future tours.

The following summer he participated in the Festivalbar, where he won the prize for the best album of the year, while the video of Malinconoia, recorded in a concert at the Palazzo dello Sport in Rome, won as the best videolive of Riminicinema ’91. 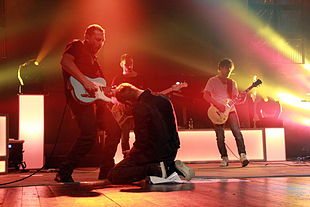 On January 14, 1993, Masini published T’innamorerai. The album contains the piece Vaffanculo, which sparked controversy and censorship on both television and radio. The disc sees the collaboration of the Bolognese director Stefano Salvati. The album is also released in Spanish (Te enamorarás). In Italian it also came out in Germany and France, obtaining good sales results.

In January 1995 the fourth album, Il cielo della vergine, released in Italy, Switzerland, Belgium, the Netherlands, Germany and, in the Spanish version (El cielo de virgo), was released in Spain and Latin America. Also this album was the subject of criticism, for the two songs Bella stronza and Principessa, both very direct and explicit.

In 1996 L’amore sia con te was released, a compilation of some pieces by Masini, with the addition of the unpublished song that gave the title to the collection and of Meglio solo, an old song from 1989 recorded on the B side of the 45 rpm of Desperato . The collection was published simultaneously in Spanish-speaking countries under the title Mi amor allí estará and with a slightly different tracklist. In the summer the tour Love with you started. In 1997, Enrico Ruggeri called Masini to interpret the song La gente di cuore with him, contained in the album Domani è another day.

In 1997 he recorded a new version of We would like the sea in duet with Montserrat Caballé, present in the Spanish soprano’s album Friends for Life.

After almost four years of silence, on 12 November 1998 the album Scimmie was released, released by the Ma.Ma. label, founded by himself and by Mario Manzani and Marco Poggioni. The album, although critically appreciated, was a commercial failure.

In 1999 he released the single Il più più trivale, and in 2000 he participated in the Sanremo Festival with the song Raccontami di te, finishing second to fifteenth. At the same time as the event, the album Raccontami di te was released on 22 February 2000, containing the song presented in Sanremo, Il Giorno più trivale (re-titled Il Giorno di Natale) and nine other songs. 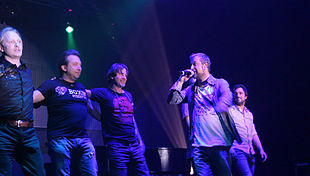 Masini and his band today

On March 27, 2000, Masini also began the new tour Tell me about you, which took place in two sessions: a spring, theatrical, and a summer one, in the squares of many cities in Italy. After the tour ended, on January 26, 2001 he released Exit of Security, a disc containing 14 new songs, written throughout his career.

On April 17, 2001, Masini announced his retirement from the songwriter career, justifying him with what he called a fury of criticism and censorship that would have reserved persecutory treatment towards him, preventing him from divulging his albums in the main promotional channels. Masini however left in late April for his 2001 tour.

Autumn 2003 marked the return of Marco Masini with the independent label MBO Music of Mario Ragni, his discoverer at the time of Dischi Ricordi. The work, presented to the press on October 7, 2003, has as its title … my journey, retraces its history with new arrangements and opens with three new songs (Generation, I will not marry you and Welcome). 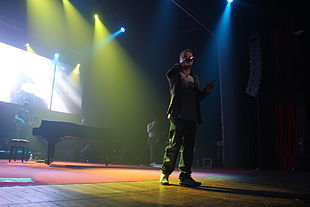 Masini on stage during a concert

Masini appeared, for the fourth time, on the stage of the Ariston Theater of Sanremo for the 54th Italian Song Festival with the song Flying Man, which will win. In conjunction with the event, the Masini album was released on the record market, or a new edition of … my journey with the addition of 2 unreleased tracks, precisely Flying Man and And I love you, which came out as a single in the May. From the end of September, with the publication of Masini, he began his international tour in European countries: the Netherlands, Belgium, Luxembourg, Switzerland, Germany and Austria.

2005 saw Masini participate in the 55th Sanremo Festival with the song In the world of dreams. On June 10, 2005, after 4 and a half years from its last publication, the album Il giardino delle api was released. On November 11, a single extract from this album came out in stores, Stay like this, containing the theme song of the cartoon Shaman King, broadcast on Italia 1, composed and performed by the same artist. In 2006 he recorded a song exclusively for his fan club, titled What remains, written by Andrea Amati as a dedication by the same fans several years earlier.

After a two-year tour, held in the summer in the squares and in winter in the Italian theaters and clubs of Central Europe (Switzerland, Germany and Belgium), in November 2006 Masini was engaged with Umberto Tozzi in the production of the album Tozzi Masini, containing three new songs written in four hands, a duet on T’innamorerai plus six pieces by Tozzi reinterpreted by Masini and six by Masini reinterpreted by Tozzi. On October 27, 2006 the Dear Father collection was published. 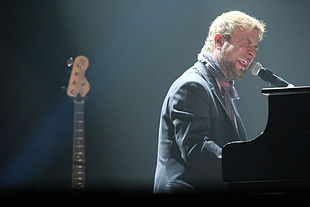 tour In 2008 Masini promoted a tour in Italian theaters to present his recited show, written together with Beppe Dati, entitled Il brutto anatroccolo. Inspired freely by the fable of Hans Christian Andersen, Masini retraced his life, linking to each moment the songs that best matched the narrative thread.

In 2009 he presented himself at the Sanremo Festival with the song Italy, reaching the finalist. Later he released the album Italy … and other stories, which contains the song of Sanremo and 9 other unpublished works, 8 of which written in collaboration with Beppe Dati, while Gli anni che non hai was written in collaboration with Giorgio Faletti . On April 17 in Rome the 2009 songwriter tour began.

In 2010 he returned to the Ariston stage accompanying Povia on the fourth evening of the 60th Sanremo Festival in an acoustic version of the song La truth. On November 23, 2010, to celebrate the songwriter’s 20 years of career, the live collection Un palco lungo … 20 anni! Came out, containing the recording of the concert held on May 14, 2009 at the Nelson Mandela Forum in Florence.

In 2011 Masini announced the temporary interruption of the collaboration with Beppe Dati, who signs only two tracks from this new 2011 album, and at the same time, the beginning of a new collaboration with the composer Antonio Iammarino. On September 27, 2011, the new album entitled Nothing important came out, which debuts directly at the 8th position of the FIMI Album Rankings. In July 2012 he received, in Marina di Carrara, the Lunezia Prize for the tribute to Giancarlo Bigazzi and special mention for the musical and literary value of the album Niente d’Importante.

In 2013 he was part of the cast of the artists in challenge in the Special Canzonissima of the transmission The best years on Rai 1 of which he won the final with an interpretation of What will remain of the 80s by Raf. In April 2013 he released his new album entitled La mia storia piano e voce, containing the first single Io ti volevo, which debuts at the 81st position of the FIMI Album Ranking, but which rose the following week to position number 15. In the month of April the new tour started.

He participated in the Sanremo Festival 2015 with the song Che giorno è, placed in 6th place. In February 2015, under the Sony Music label, the artist published Cronologia, a collection to celebrate his twenty-five years of career. The three disc album contains 5 unreleased tracks including the singles Che Giorno è and Non è vero che amore changes il mondo, the latter published on April 10 of the same year.

In February 2017 he participated in the sixty-seventh Sanremo Festival with the song Moved by one second, reaching the final and placing in thirteenth place.

On 29 September 2017, Marco Masini in concert was released, the live album containing the cover presented at the Festival Signor tenente (single launched on radio on 15 September) and his version of the song written for Noemi La Borsa di una donna.

In February he participated in the Sanremo Festival 2018, during the evening of duets, for the reinterpretation of Everyone has his story, a song in the race interpreted by Red Canzian.

In June 2018 he was sworn and coach of the first edition of Ora or never again on Rai 1, conducted by Amadeus. What kind of breakfast does LECCEBnB offer?

During their stay, Ferrante D’Aragona rooms offers a much appreciated by the guests breakfast (score reviews: 8.0). Can i park a car at Ferrante D’Aragona rooms? How can I get to LECCE BnB from the nearest airport?

From the nearest airport, you can reach LECCEBnB by:

How far is Ferrante D’Aragona rooms from the center?

Ferrante D’Aragona rooms is located 350 m from the center of Lecce. On the beach in Rivabella-Gallipoli Extra measures for health and safety Located in the top-rated area in Lecce, this property has an excellent location score of 9.7!

🔒Get a great price for your next stay Prices may rise. Guarantee your reservation today.